The importance of field scale data in decision making

Giving growers either side of the border the chance to see, first hand, the farm-scale work in progress. The Hutchinsons Helix project allows growers to trial and adapt new technology developments and innovations at whole-farm scale.

When asked why Barelees Farm was chosen as a Helix Farm, Stuart Hill Technical Director at Hutchinsons noted that: “The Helix Farm initiative enables the host to see the influence of the trials across the whole business. The Todds are fully involved and bought into the idea of whole farm and field scale trials work.”

Thomas Todd has farmed with his parents at Barelees Farm since 1988.

296Ha of mainly sandy clay loam soils in a rotation of winter oilseed rape, winter wheat (1st and 2nd), vining peas and spring barley. Part of this is a 73Ha off lying block of ex coal board heavy clay loam which is split between 40Ha of the above rotation and the remainder in continuous winter wheat for the last 10 years.

With an average field size of 16 Ha, the business is well catered for with high output machinery to ensure the fast turnaround of land after the combine (if needed). The Todds aim to cultivate, drill and roll any given crop within 72 hours.

The business has been taking part in YEN for several years with an assessed wheat yield potential of 21t/Ha, so Thomas Todd is keen to explore how they can get closer to this.

When the Todd family took on the farm in 1988, soil structure was poor from years of routine ploughing and combination drilling, combined with a legacy of low organic matter (less than 2%), and subsequently very little biological activity in the soil.

“Much of the soils are sandy clay loams, with some running to blow away sands so the land struggles to retain moisture. If the soils are over cultivated, they go too fine and then slump the moment some moisture hits them,” says Thomas Todd.

How to improve soil structure?

Spade in hand, Hutchinsons soil specialist Dick Neale considered the soils at Barelees, and observed that whilst you can’t remove stones or change the soil texture, it’s about understanding as much as possible about the soils in order to manage them correctly.

On the headland, Mr Neale dug up two soil examples to compare one which had been recently cultivated by the farms Horsch Terrano, and the other which had not been touched since drilling the previous autumn.

He demonstrated that by running water through the soils, it was possible to see that the recently cultivated soils slumped faster, whilst the 2021 drilled soils had a better structure with a well aggregated top soil, crumbly and full of worm casts, although the spade struggled to get past 2” deep. Below this depth the soil was very blocky, although the crop had rooted down through this layer and the soils were still moist at the end of June.

“In this situation, the soils really need to be broken up, post-harvest,” Mr Neale commented.

He added: “In these soils, direct drilling can work really well behind OSR, beans and peas, but will be a disaster after cereals. This is just down to how the soils present themselves after the preceding crop.”

With the Helix farms sandy loam soils not being compatible to direct drilling after Cereals, they need a cultivation pass first. “These soils will just slump and need a tickle to successfully drill. If you really want to direct drill, consider going strip till, such as with a Mzuri, Sumo or Claydon,” he said. 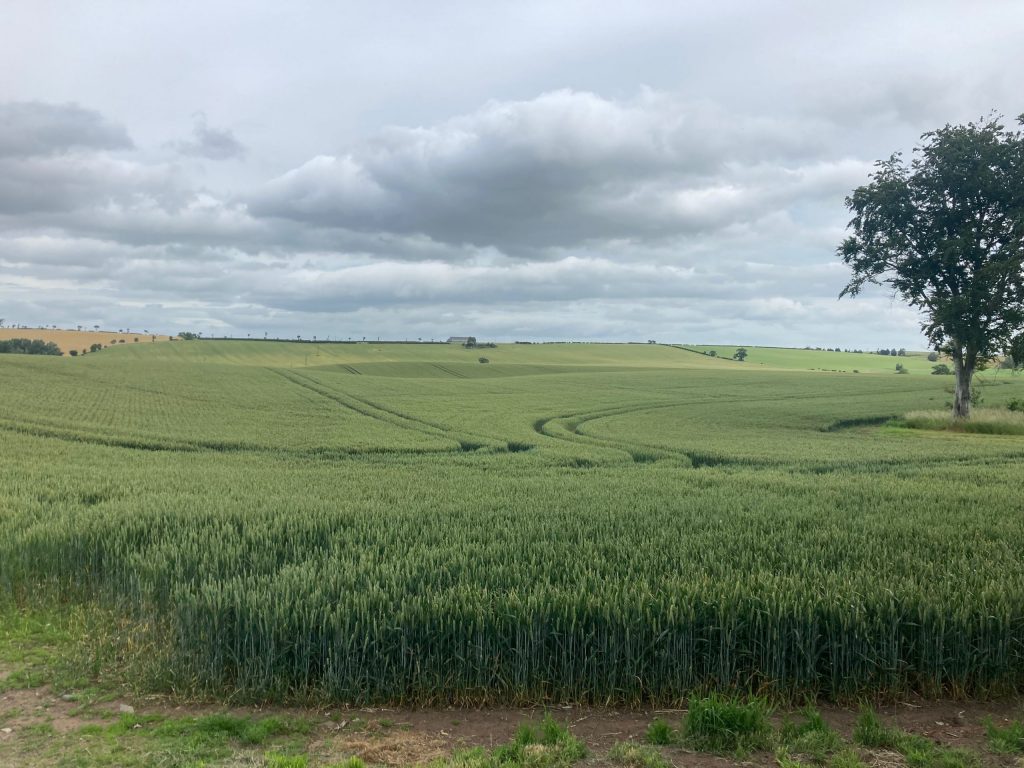 The business uses cover crops in a variety of situations, including immediately following the vining peas as a catch crop before the oilseed rape is drilled, over July to September.

Mr Neale discussed the importance of choosing the right covers for your drill. “Remember, vetches won’t go through a tine drill, all you will end up with is a huge heap of green stuff at the end of the field’” he said.

“Before deciding which cover crops to use, its important to consider the soil type, intended duration of the cover, its purpose and the following crop.” Mr Neale continued.

David Howard, Hutchinsons head of Integrated Crop Management (ICM) addressed how the trials on the farm are demonstrating the need to show how ICM is being delivered. He made the point that customers in the corporate food chain are being asked to demonstrate their sustainability and carbon credentials.

“This in turn places a requirement on their farmer suppliers to be able to show this. Whilst many growers are doing ICM already, as an industry we are often very poor at recording our decision making and proving what we are doing,” Mr Howard said.

Aggregating lots of data enables better decisions, and many growers are faced with the dilemma for a given field or area within a field of ‘improving it’ or ‘removing it’ within the crop management planning.

Modelling using farm data allows growers to remove the subjective risk factor in decision-making, such as the BYDV model in Omnia which provides data backing up or justifying spraying decisions.

Hutchinsons work on yield prediction is on average within 10% of actual yield in any given field and season, and, though still in development, will become a significant tool to influence input decisions. He noted that yield prediction becomes more significant, as input costs get higher.

For example, Mr Howard explained that the influence of targeted variable rate inputs at ’21 prices gave a £50/Ha benefit in comparison to flat rate applications, which is worth having. However fast forward to ’22 input costs, and this benefit looks more like £207/Ha for the same targeted approach vs flat rate inputs.

“Unless you can see where you can make efficiencies, you can’t bring about change” Mr Howard observed. “Given that almost every field has variation within it, if you apply standard rate inputs, you will get variable outputs. For more consistent results, you need variable inputs.”